FIRST CLASS OPERATION. I asked Tony to perform a service call to repair a heavy sliding glass door that was supposedly repaired three weeks earlier by another company, but sill required two hands and a great deal of effort to open the door. Tony and his son arrived on time and spent about 2 hours taking the door apart and solving the problems. Upon completion, this same door could literally be opened with one finger. Tony explained that the other company knowingly installed the wrong support rollers which were way too small and were binding severely on the track. Tony and his son were pleasant, professional and explained every adjustment they made in detail. As a result, I would never use anyone else for sliding glass door repairs. Thank you Tony for everything! I learned an expensive lesson. As far as the other company, STAY AWAY FROM SLIDERS OF FLORIDA AND THE OWNER KEMP MONTAGUE. That man ripped me off for $350.00, made multiple trips with nothing but excuses, wanting more money to do additional work that had nothing to do with the problem. When I refused to pay another dime to this jerk and addressed his unprofessional tactics , he became violent! After subsequently checking several sources online, I found that this man apparently closed another business called SLIDERS TOUCH after getting bad reviews for the same tactics. The worst experience I ever had with any company. He is the owner, works by himself and touts 20+ years of experience. The man is despicable.

Professional, honest, hard-working and answers the phone on the first try. I cannot say enough about Tony and his crew and their ability to not only complete the project but go above and beyond to ensure that anything that needs to be done is taken care of in the first visit. Five stars!

Tony and his son are the best! I made several calls before using them to fix my patio doors. Others told me I needed all new doors which was thousands of dollars and Tony said "I can fix these, they don't need to be replaced!" The doors are like new and I'm so glad I found him. Will definitely refer him to any of my customers and friends that have sliding glass door and window repairs!

I highly recommend Tony and A1 sliders for the fine work they do on slider doors. I have the original sliders in both my living room and master bedroom. Before he came, they were not in good working order and were very hard to operate. After his visit, they work as well as any new slider I have ever used. His service is both prompt and courteous. He even made a follow-up call to make sure we were pleased with the outcome. In an age where customer service is lacking by a lot of businesses, A1 Sliders exceeded my expectations. I would use him without hesitation for any future need I might have.

We had A-1 Sliders come and clean our sliding glass door today. They replaced the wheels, cleaned the track, repaired the door handle and just overall cleaned everything up. It opens like butter now! I highly recommend them. Tony was very nice, as was his son who was helping him. A-1 is a family owned and locally operated business. It is so nice to support local!

On time , reasonably priced , honest! I have two sliders, they re -did one new lock new rollers and a new white handle, making it look totally updated ! Told me the other could wait if I wanted. Doesn't really need anything. It's on its way out but we can get some more time out of it . Don't replace your door just refurbish the old one! Will use again! Oh and the door was alarmed. Didn't need to call alarm company after to readjust ! Will use them again for sure!

A friend of mine suggested Tony Ellis. Tony came to my condo in a timely manner and examined our door and said he had all the parts to repair it and could start work immediately. And he was right. A few hours later, I could open and close the door with one finger. It slides so easily it's better than a new door. And he cleaned and vacuumed up the work area thoroughly. We are very pleased with his work. Tony did a great job and I highly recommend his services. And he saved us hundreds and hundreds of dollars!!

"For many years Tony has rendered his personal repair service for all the sliding doors in our building at S. Atlantic Ave in Ponce Inlet. He is very capable and responsive to our service calls and repair needs, and highly recommended!"

"So pleased after years of a non functioning sliding glass door. Thank you Tony for repairing my 10 foot slider. You are truly an honest professional that did a great job at a reasonable price to boot. I highly recommend you to my family and friends. Thank You Again!!!"

I used A-1 Siders to fix my 3 panel sling glass doors. I called A-1 Sliders on a Sunday, and he was at our house the next morning. Tony is awesome. I had to call him out to replace the rollers and track. I used another guy 3 years ago referred by "Home Advisors," who totally messed up my doors. Tony had to fix the poor repair done previously. If you want a job done right, I highly recommend Tony to do your job. Hes a perfectionist and you will appreciate his work and his helpful personality!

A-1 Sliders did a great job repairing our outdoor Sliders. They arrived on time and were very clean. We would recommend A-1 Sliders..

Tony did a great job on repairing my windows at a great price. I am very satisfied with his work. I highly recommend Tony.

Expert service, went above and beyond to ensure every aspect of the job was in order.

We had Tony of A-1 Sliders make repairs to our sliding glass door last week. I was impressed first by his calling when he said he would, and showing up on time for the appointment. He got right on the case and provided information along the way as to what he was doing. And even though he talks to himself while working, and who doesn't talk to themselves these days, he gave me confidence in the repair being done assuring me all would be fine. He carries his parts warehouse in the truck and completed the job quickly. We had had so much trouble with the door, we had contemplated replacing at a cost of $3000+. Tony gave us what basically is a new door operating so smoothly. Thank you, Tony. We would highly recommend him for the expert he is and the fair price charged. Phil Beauregard, Melrose,Fl.

I absolutely would recommend A-1 Sliders and Tony for any repairs you need to have done. He had given me an estimate of $300.00 over the phone for my three doors which had gotten difficult to open and close. Upon arriving and inspecting them , he stated no new rollers were needed, just some minor adjustments and a good lubricating. When he was done, all the doors worked just fine and his charge was $100.00. He is a very honest and honorable man! He will not take your money needlessly, unlike another company that came out and gave me a $690.00 estimate.

Tony is amazing with repairing sliders. We weren't sure what needed to happen to our triple slider when we called him. We'd had trouble getting the left door to lock and in trying to repair it ourselves, had gotten a piece of plastic totally stuck in the track between 2 of the 3 doors. So now our doors wouldn't close all the way, much less lock. Tony though came in and totally saved the day. He meticulously took apart the left door (did not have to remove it from the track!), got the plastic out, replaced the rollers on the left door, adjusted the door and viola-now the doors open and close easily and lock too. In fact, they're good as new. Did I mention he was on time and reasonable. Would highly recommend.

Tony did an amazing job. We thought we had to replace the door, but Tony was able to make it like new. Highly recommend his services!!

ABOVE AND BEYOND!
Tony not only refurbished my sliding doors to perfect working condition, (a feat that I thought impossible), he saved me thousands by not having to purchase new doors! He is an honest businessman with integrity. He does top notch work and charges a very reasonable price. If you think your doors are beyond repair check with Tony first, I am happy that I did!

Greatly appreciate the ability to use our backyard oasis again. Tony did an excellent job. Clean, professional, considerate. Thank you! Highly recommend.

Tony was on time, friendly, and did a great job at a reasonable price. This man is very passionate about his work! I would definitely use him again.

Expert service, went above and beyond to ensure every aspect of the job was in order.

EXCEEDED EXPECTATIONS
A-1 Sliders did repair on two sets of sliders at my Flagler Beach home. Tony was prompt,
Professional and did excelent work. He did not try to convince me to do unecessary repairs.
I highly recommend Tony, and will use A-1 Sliders for all my window and door services.

Tony was prompt in calling me back about my repair to my sliding glass door. He was on time for the appointment and very professional. He did exactly what he said he would and explained everything he was doing and even gave me tips on upkeep on the door. I would recommend Tony to anyone who wants a reputable repairman.

Tony was on time worked fast and did a great job.
Would recommend for any sliding door problem 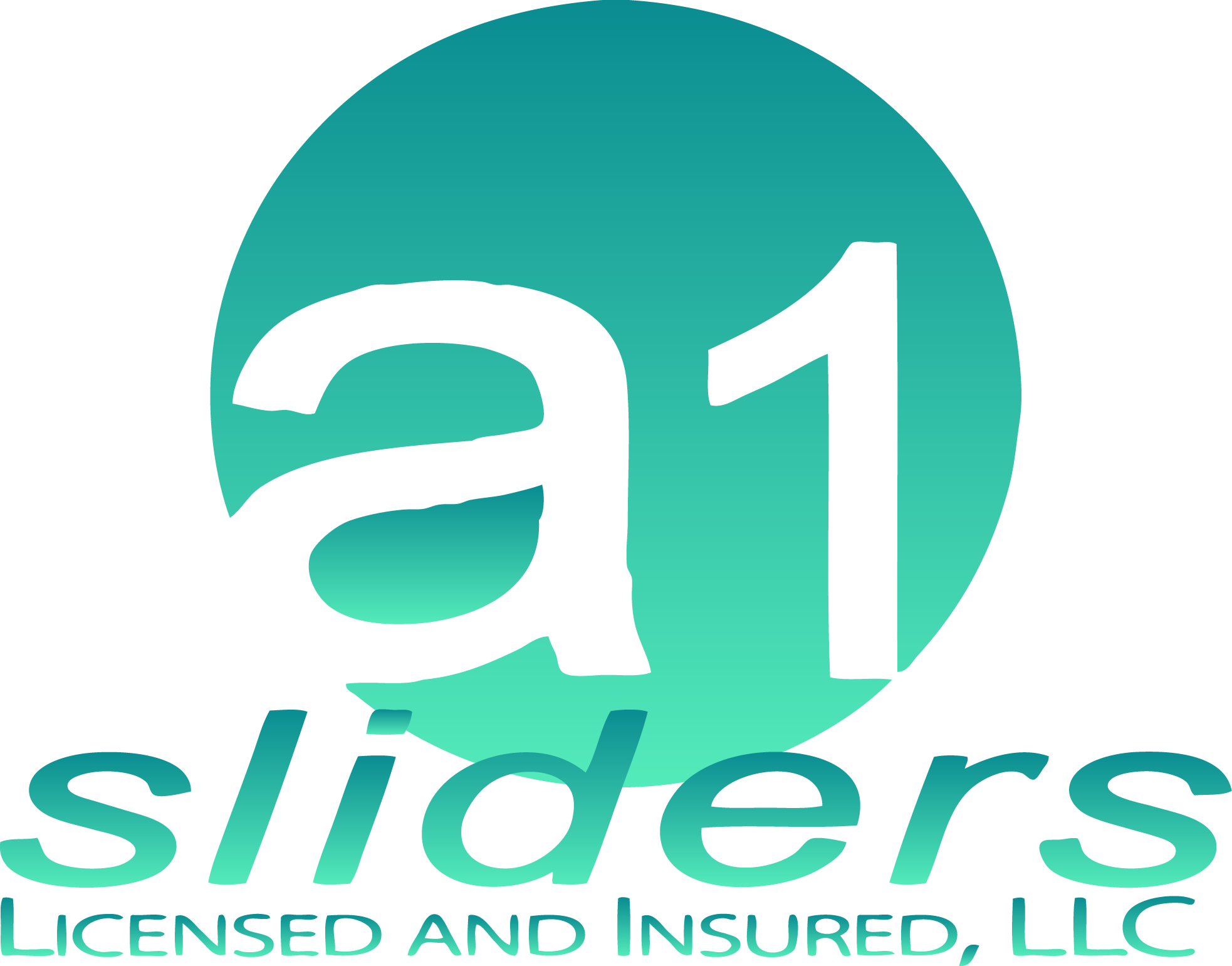